Magnum Opus! MT’s talent to spot the untold story remarkably comes out in this monumental retelling of an iconic epic. The icing on the cake is the new version of Bhimsen getting embarrased by Karna in the midst of war. As justiifed by the author in the epilogue, only MT can see such nuances of a story untold.
Keralites are already aware how he made a hero out of Chathiyan Chandu overnight, bringing down to earth with a thud the blue blooded images of Unniyarcha and Aromal Chekavar, in a bold retelling of a popular folktale.
When Bhimsen along with Karna, Draupadi, Duryodhan take the laurels, the likes of Krishna,Arjun, Kunti and Yudhistar take a back seat.
Kalyanasougandhikam known to Keralites through the ubiquitous Ottamthullal narrations, loses its fragrance, in MT’s fervour bring in an earthly touch to everything. The beauty of Bhimsen adventurously looking out for the flower, in his desperation to appease Draupadi, and the disinterest she shows once having received the flower since she had already started Arjuna’s tenure, totally disregarding the pain Bhimsen had to undergo, gets no mention in MT’s version. The romance of Kalyanasougandhigam is something the reader misses in in this version. Overall, the original may lack originality, but Mahabharthma as told by the collective selves called Vyasa, is more mystic, readable, enduring and romantic than MT’s quest for originality and his venture to read the fine lines. MT, I’m afraid you won’t be counted as one of those Krishnadwaipayanas, the collective soul called Vyasa, since the version may not get accepted with the masses, who would rudely refuse to accept Krishna as just another rusty character.
I’ giving five stars sine I’m in love with this story teller since my childhood, completely bowled over by his aura, and rightfully think that his version of Mahabharat is in all liklihood is more invclined to be like what must have really happened, if at all it was a real story. 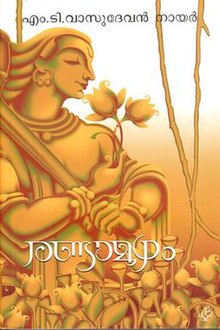